Right now, one-third of all wildlife species in the United States are at increased risk of extinction. In Indiana alone, more than 150 fish and wildlife species are in urgent need of proactive, on-the-ground conservation efforts before they pass the point of no return.

Congress just took the first step toward making those efforts a reality with the introduction of the bipartisan Recovering America’s Wildlife Act. This bill will fund proactive efforts led by state fish and wildlife agencies and tribes to address the nation’s looming wildlife crisis to prevent species from becoming endangered and will be the most significant investment in wildlife conservation in a generation. (Senate Version) (House Version)

At home here in Indiana, this could add over $14 million dollars to the DNR’s budget to restore native landscapes, protect and restore wetlands, and activate numerous species recovery projects that are outlined in our State Wildlife Action Plan that are in need of funding. 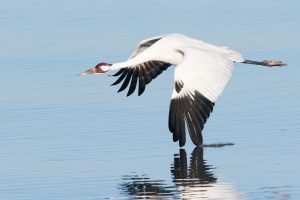 During August and September, congress is at home so this is a perfect time to reach out. Please join our efforts in asking your member of Congress to support the Recovering America’s Wildlife Act to address severe wildlife conservation challenges such as habitat loss, competition from invasive species, disease, climate impacts, and other threats.

Due to committee assignments, US Senator Mike Braun’s support on this bill would be especially influential. We need your help in reaching him first. You can learn more with this IN factsheet, and funding Q & A factsheet; or simply say:  “Senator, please join your colleagues Senators Martin Heinrich and Roy Blunt in cosponsoring the transformative, common-sense bipartisan Recovering America’s Wildlife Act (S. 2372) today.”

The Recovering America’s Wildlife Act will accelerate the recovery of these species, including the more than 150 U.S. species listed on Indiana’s State Wildlife Action Plan.

The Recovering America’s Wildlife Act is built upon the premise that the best way to save America’s wildlife is through collaborative, proactive, voluntary work before species need more expensive “emergency room procedures” through the Endangered Species Act. I urge you to create a bright future for America’s wildlife and natural heritage by supporting and co-sponsoring S. 2372.

I am writing to thank you for co-sponsoring H.R. 2773, the Recovering America’s Wildlife Act, and asking you to do all you can to ensure it passes and is signed into law.

The Recovering America’s Wildlife Act invests in proactive, on-the-ground, collaborative conservation efforts that match the magnitude of America’s wildlife crisis. Healthy wildlife populations are a vital component of our national heritage and our $887 billion dollar outdoor economy. But our diverse array of fish and wildlife is in crisis with more than one-third of all species at risk of becoming endangered. Challenges facing our fish and wildlife in the 21st century include habitat loss, climate change, invasive species, and emerging diseases.

Thank you for standing up for wildlife through your support of this bipartisan legislation. I urge you to continue advocating for passage of the Recovering America’s Wildlife Act in the 117th Congress.