This year, the Indiana General Assembly passed SEA 389, which significantly reduced protection for Indiana’s remaining wetlands.  It was a blow to all who understand the vital importance of wetlands to water resources and to wildlife, but it was not an endpoint.  There is much we can still do ensure the continuation of Indiana’s wetlands.  The Hoosier Environmental Council and Indiana Wildlife Federation are hosting a webinar to review steps we can all take.

In a press release yesterday, Governor Holcomb announced the appointments to the Indiana Wetlands Task Force:

The governor made thirteen appointments to the new task force, who will serve until December 31, 2022:

The Quick Version: “Pass it clean in the second reading”

Contact your IN House Rep before Monday, April 12, 2021 with the message:

There is both good news and bad news on the wetlands bill, SB 389.  The good news is that on April 7 the House Environmental Affairs Committee significantly amended the Senate version of SB 389 to protect most wetlands by adopting Amendment 24.  The bad news is that some wetlands will lose protection.

In further good news, Representative Errington will be offering an amendment on the House floor to replace what’s currently in SB 389 with language creating a Wetland Task Force to examine state wetland policy. Sadly, we do not anticipate there will be enough support for this good amendment to pass.

A number of Indiana’s strongest conservation organizations have carefully assessed all of the remaining options to try to improve the bill and also carefully gauged the strength of the wetland de-regulation faction of lawmakers at the Statehouse and concluded that, if the Errington Wetlands Task Force amendment fails, the House committee version is the best wetlands language we will be able to get in the 2021 legislative session.

Why would we support a bill that is still bad for wetlands?

Well we don’t, but if the House Environmental Affairs Committee version does not pass, we will likely get something much, much worse.  Many legislators (in both the House and Senate) are in favor of seriously weakening state protections of wetlands. At the next step in the process (second reading), either the Senate passed version of SB 389 bill, which repeals the wetlands law, or an amendment like #19, which is very close to a repeal, will become the final bill.  Please see the table below for a detailed comparison of the Senate version, Amendment 19, and the House committee version. 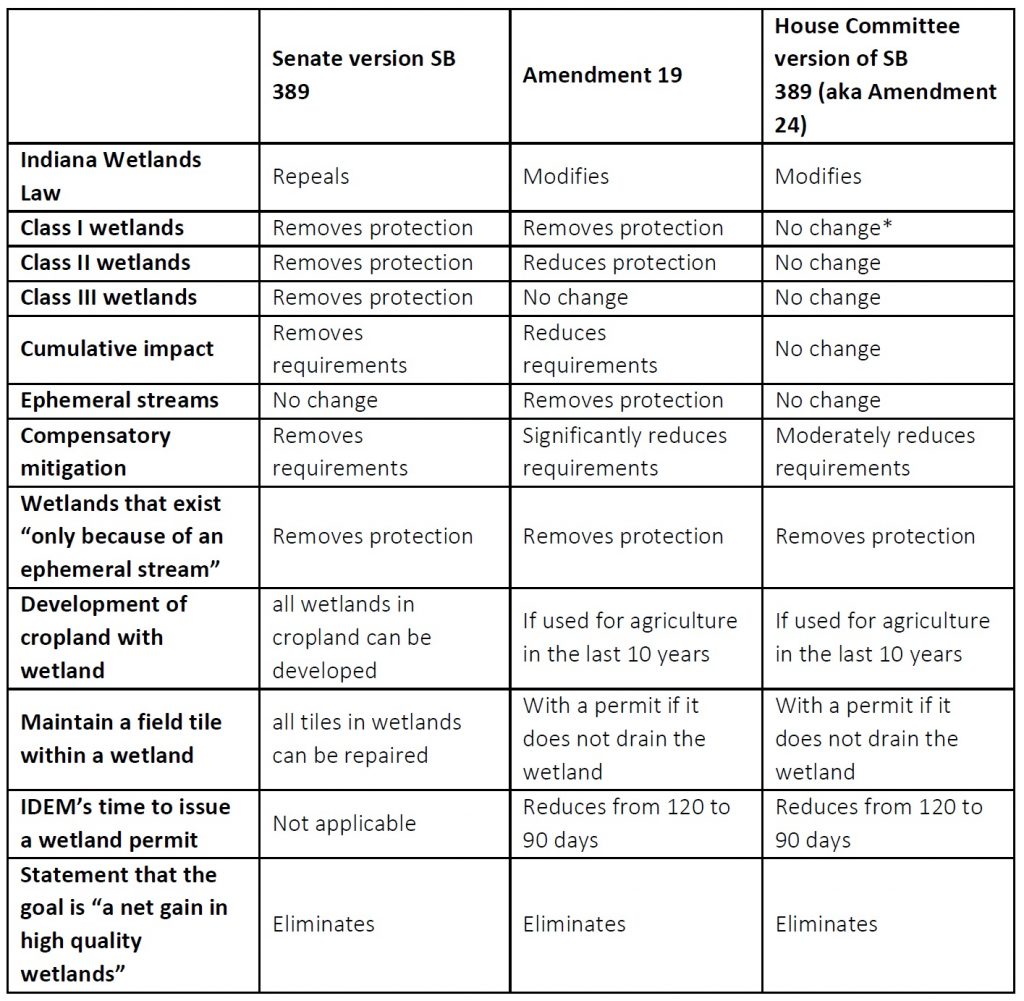 Therefore, the Indiana Wildlife Federation takes the following positions and urges our supporters to contact their state representatives with the following four requests:

2.) If the Wetland Task Force amendment fails, support the House Environmental Committee version of SB 389.  The committee version, but no further! Pass it clean, with no amendments in the second reading.

3.) Oppose Amendment 19 to SB 389 or any other anti-wetlands floor amendments. Pass it clean, with no amendments in second reading.

Reaching your lawmakers about the above four calls-to-action is crucial to making sure that the House Environmental Committee’s version of SB 389 survives a House floor vote — and the far more damaging version, Amendment 19 (or its equivalent) — does not replace it.  You can reach your lawmakers by going to bitly.com/INLegis.

[Updated Mon. Mar 22, 2021] – Over the weekend, the House Environmental Affairs committee decided against hearing Amendment 11 due to pushback (keep calling/emailing/tagging!) and that they would be working on Amendment 12. It was posted late on Sunday with less than 12 hours to review before the hearing.  Here is Amendment 12.

While there has not been adequate time to review the impacts of the amendment, it is still clearly going to cause major losses to Indiana wetlands. We recommend the same action of reaching out to your state legislators to “Oppose SB389 as a dangerous bill for water quality, wildlife, habitats, and flooding. [End update]

Although Indiana legislators promised to allow a full week for organizations like IWF the time to understand and react to a proposed amendment to SB389 (a full repeal of protections for all state regulated wetlands in Indiana), we now only have the weekend. Despite weeks of negotiation by IDEM and numerous legislators that promised there would be a reasonable compromise; the House Environmental Affairs Committee is going to take up an amendment to the bill that will gut Indiana’s wetlands law. They will meet Monday, March 22, at 10:30 AM.

Amendment 11 will lead to loss of much of Indiana’s remaining wetlands. It allows destruction of:

It also greatly reduces the wetland mitigation ratios and it increases the amount of wetland that can be destroyed when there are several wetlands involved in the same development project. Here is a table to illustrate how Amendment 11 weakens existing wetlands protections:

If SB 389 passes in its current form or with Amendment 11, Indiana will pay a high price in increased flooding, lost groundwater recharge, lost water purification, and loss of endangered and threatened species. Please do all you can before Monday to tell your legislators, especially members on the House Environmental Affairs Committee to save Indiana’s remaining wetlands by opposing SB 389 and opposing Amendment 11.

You can contact your legislator by finding them here.

You can also send a pre-drafted email to your legislator by using this form graciously created for us by the National Wildlife Federation Water Action Team.

The second event will be hosted by the Hoosier Environmental Council, White River Alliance, and the Indiana Land Protection Alliance. Speakers from the Indiana Department of Environmental Management, Army Corps of Engineers, and environmental consulting will use a case study project to illustrate how federal and state laws work to protect isolated wetland functions and conclude with possible changes to these policies being discussed in the current Indiana legislative session.

Please see the attached announcement or this website for the list of speakers and details, as well as a link to register.

Scientists from universities across Indiana will share research on the value of isolated wetlands, which are vital to the health of Indiana’s ecology, water and people. These unique and important ecosystems are currently threatened by Senate Bill 389, which would repeal critical wetland protections in Indiana. Dr. Sara McMillan will moderate a forum with speakers from Purdue University, Indiana University, Notre Dame and IUPUI about many ecosystem functions that isolated wetlands provide including: flood storage, wildlife habitat, water quality improvements, and carbon storage. Use link to register.